Shark Anatomy
A Quick Guide to a Fascinating Body

On the surface of it shark anatomy looks pretty straight forward, but as you delve a bit deeper you discover all kinds of awesome things.

Most sharks have a roughly spindle-shaped body which is designed to move easily through the water.

They have five sets of fins, each with a specific purpose, and they breathe through their gills. 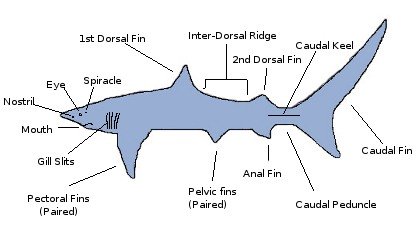 Let's have a closer look at what makes shark anatomy so amazing.

Return to World of Sharks from Shark Anatomy