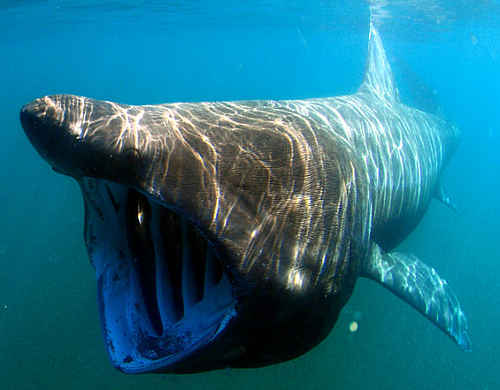 They also have a longish snout that protrudes above the mouth. I probably have a soft spot for this shark because I have a thing about long snouts. Just ask my poor greyhound how many 'needlenose' kisses he gets every day.

In juveniles the snout resembles a small trunk which may be why they are sometimes called elephant sharks.

Despite their huge size and slow speeds, they are known to occasionally leap fully out of the water. They may do this to dislodge parasites though it's not known for sure. Maybe they do it just for fun.

They vary from brownish-grey to dark grey or almost black on top and paler to white underneath. They may have mottled markings on their back and sides and white blotches under the head.

The caudal fin is almost symmetrical with the lower lobe being almost equal in size to the upper lobe. Strong caudal keels are present on the caudal peduncle.

Their teeth are the same in the upper and lower jaws. They have more than 150 rows of tiny teeth which are curved backwards.

This shark is a filter feeder, hence the huge mouth. It also has very large gill slits which almost fully encircle the head. They have bristle-like gill rakers to filter their food from the water. These are periodically shed and replaced.

It was once thought that basking sharks shed their gill rakers in the winter and spent the season resting on the seabed. It's now thought that they may actively feed all year round but that they spend the winter in deeper waters.

They feed entirely on plankton by ram filtration.

Little is known about reproduction in these sharks. Ovovivparous with possible oophagy. Number of pups per litter is unknown though probably averages about six. Gestation is thought to be somewhere from 12 to 16 months though it has been suggested it may be as long as three and a half years.

Worldwide in cold to temperate waters. They range in depth from the surface to around 570m.

Return to World of Sharks from Basking Shark 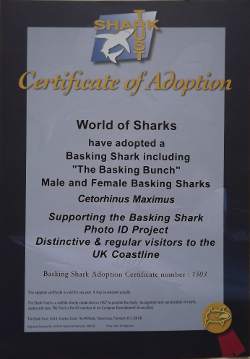 If you love basking sharks as much as we do you can adopt one from The Shark Trust.

The money goes into projects researching these amazing animals. 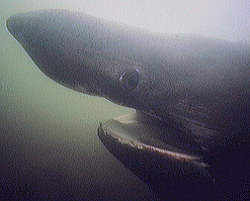 Love it!
I have a thing about long snouts. 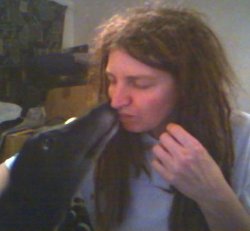 The evidence!
'Needlenose' kisses. Just can't resist anything with a long snout.