There are many different types of sharks.

In fact, they come in so many shapes and sizes you would be hard pushed to recognise some of them as sharks.

That said, although the details may vary, they do all share certain characteristics. 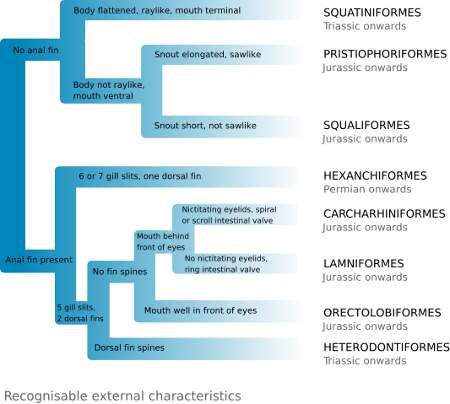 Sharks belong to the class Chondrichthyes, or cartilaginous fish. This means that they have a skeleton made from cartilage rather than bone. Cartilaginous fish are divided into two subclasses, Elasmobranchii and Holocephali.

We’re interested in the Elasmobranchs as this class contains the sharks, along with rays and skates. The class Holocephali contains chimeras.

Elasmobranchs (meaning plate- or ribbon-like gills) are divided into orders. Each order contains several types of sharks divided further into families and species. Rays and skates belong to the order Rajiformes while sharks belong to the following:

This is a very broad overview of sharks. We’ll be looking at individual species in more detail as this site grows. Please keep checking our ‘What’s New’ page for regular updates.

Return to World of Sharks from Types of Sharks