Some shark senses are like ramped up versions of our own, and some are unique to them. 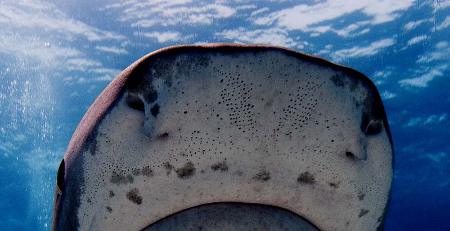 Let's start with the ones we don't have:

These are specialised sensory organs, called electroreceptors, visible as small pores on the shark's snout.

This network of pores is filled with a jelly-like substance which help the shark to pick up electrical fields in the surrounding water.

They can detect even the slightest of electrical pulses from the muscle movement of potential prey.

This helps sharks, like the hammerhead, to locate prey even if it is buried in the sand on the seabed.

It is also possible that these electroreceptors help the shark to navigate on long migrations by detecting the earth's magnetic field.

The lateral line is made up of a series of sense organs, called neuromasts, that run along the side of sharks and other fish. They detect vibration and movement in the surrounding water and aid in spacial awareness.

Like our eyes, sharks have both rods and cones in the retina. The rod cells are sensitive to light levels and the cones detect colours. It's not known how sharks interpret colour, but it is thought that they are very good at detecting contrast.

It's because a shark senses contrast so well that some diver operators advise you not to wear a brightly coloured wetsuit.

Some sharks have much better vision than others. Those that live at depth in low light conditions often use their other senses to detect prey and don't need to rely on sight. Some of these deep-dwelling sharks have eyes that glow in the dark.

In order to maximise the available light sharks have a layer of crystals located behind the retina. This acts like a mirror and allows the light to bounce around inside the eye. This is called the tapetum lucidum.

To compensate for this effect, sharks who live in shallow water, where there is plenty of light, have their own built in sunglasses. They are able to cover the mirror like tapetum with a layer of darkened pigment to cut down the amount of light in the eye.

Sharks have an excellent sense of smell. This is one of the shark senses that is much better developed than ours. Unlike us, their nostrils play no part in breathing and are used for detecting smells only. Water flows into the nostrils and passes the information to the olfactory lobe of the brain for interpretation as smell.

Sharks are able to find prey using their sense of smell.

Sharks don't have external ears in the same way that we do. They have two small holes located behind the eyes. The inner ear consists of a series of fluid-filled canals called a labyrinth which aids balance as well as hearing.

Sharks have good directional hearing and are sensitive to much lower frequencies than humans.

Sharks have taste buds in their mouths though, unlike us, they're not all in the tongue. Some sharks have barbels. These are long whisker-like organs near the mouth which enable it to taste and feel.

Via the lateral line, a shark senses touch from a distance. Of course, it is capable of feeling touch through its skin too, though it's thought this sense is not as well developed as it is in humans. The sensory nerves sharks use to feel touch are mainly located around the mouth and jaws, and sharks have been known to 'mouth' objects in order to feel them.

Return to World of Sharks from Shark Senses