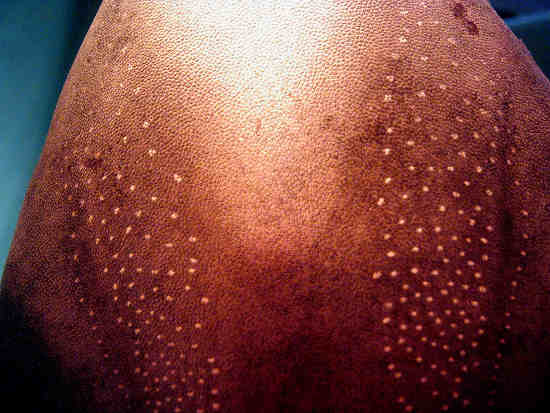 Well, placoid scales, or dermal denticles, actually. But, believe it or not they are made of the same stuff that teeth are.

Each denticle has an inner pulp which contains blood vessels and nerve endings. This is then surrounded by a very hard substance called dentine, and that is covered with an even harder substance known as enamel.

Unlike the scales of a bony fish, placoid scales don't grow bigger as the shark does, they just grow more scales. The also have the ability to shed the denticles and grow more to replace them, much like the teeth in their mouths.

All of the denticles point backwards. So, not that I recommend it but, if you ever get to stroke a shark make sure you go from nose to tail, or you're in for a prickly experience.

In fact, it is so rough that it was known as shagreen and was used in carpentry to smooth wood before sandpaper was invented.

The size and shape of the dentlcles vary from shark to shark, but they also vary over the body of an individual shark. Some bottom feeders have tough shield-like scales on their bellies to protect them from the rough seabed while they're feeding.

When viewed under a microscope, these tiny scales resemble spoilers on fast cars. One of their functions is to reduce water resistance and aid the smooth movement of the shark through the water.

Some companies are even trying to emulate shark scales in an effort to create swimming and diving suits with tiny drag resistant projections to help the wearer go faster.

Placoid scales viewed under a microscope.