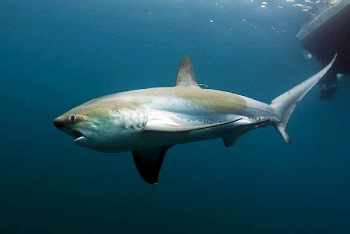 Though mostly solitary, they have been known to hunt in pairs by working to keep fish herded into tight and easy to eat groups.

The family consists of 3 species in one genus.

These fish are found in tropical to colder temperate seas. They're found in both coastal waters and the deep pelagic waters. They prefer the deep open ocean but will come close inshore to feed.

They are ovoviviparous with oophagy and, depending on species, give birth to between two and six pups at a time. They reach sexual maturity at about 14 years of age.

Though they are large sharks they are of little danger to humans. They are not known to be aggressive and the main danger is to divers getting an accidental swipe with the tail.

Well, if my greyhound can't control his, what hope is there for a shark with one the length these guys have?