It's a good thing the tooth fairly doesn't collect sharks' teeth because, if she had to leave money for every one she took, she would soon be bankrupt.

Why? Because, unlike humans, who only get one set of milk teeth and one adult set, sharks have an amazing ability to replace the ones they lose time and time again. In fact, some sharks can use, and lose, up to 30 000 teeth in a lifetime.

The shape and size varies depending on what the tooth is used for. In some sharks, such as the Great White, they're designed to tear chunks from larger prey. These teeth are triangular and serrated with the top teeth being broader than those at the bottom.

Sharks such as the Ragged-tooth (sand tiger) and Mako have long slender teeth with no serrations. These are designed to grab hold of prey that is small enough to swallow whole.

The Tiger shark has a unique tooth structure not found in any other species of shark. They have curved cusps with large serrations.

Like our teeth, those of the shark are made up of an outer layer of very hard enamel, just below that is a substance called dentine which encases the pulp, which contains the blood supply and nerves. 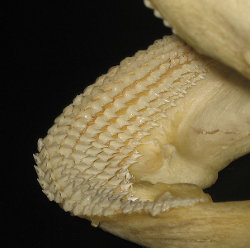 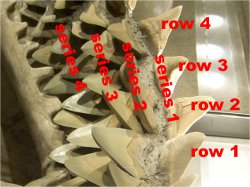 How to count shark teeth