Now, if you are going by the name frilled shark and expecting a pretty little lacy character you might not want to look at the video below. This chappie is not pretty. Having said that I do have a hard time calling him ugly.

Actually, the one in the video is a her and, I must say, as odd looking as she is, she does have some sort of charm.


Sadly, the shark in the video died only hours after the video was shot. Once thought to be extinct this specimen was spotted by a fisherman in shallow water off the coast of Japan in January 2007.

The shark was taken to Awashima Marine Park where this footage was taken. It's thought she was sick at the time of the capture and that may have been why she was in the shallows. They normally live at depths of up to 1500m.

This family contains one genus and two known species.

Personally, I like to think that giant sea serpents (and the Loch Ness Monster) really exist, but then I am a crazy person novelist.

These sharks are ovoviviparous. They are very primitive and are sometimes called living fossils. The two species are very difficult to tell apart going on external appearance alone but they do have marked differences internally.

Return to World of Sharks from Chlamydoselachidae 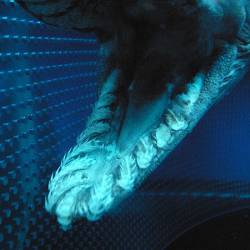