Members of the Cow Shark family, or Hexanchidae, are considered to be the most primitive of all living sharks. Not because they look like they just crawled out of a cave, (that would be me) but because they have a skeleton similar to that seen in the fossils found of extinct sharks.

They also have a relatively primitive digestive system compared to other sharks, and the fact that they have either six or seven pairs of gill slits, instead of the usual five, also links them to the sharks of the past.

The family is made up of 4 species in 3 genera.

Not much is known about these sharks as they tend to spend most of their time in very deep water. However, they do come into shallower water to breed, and have been encountered by divers.

General body shape - These sharks have long and fairly slender bodies. Some species can grow to over 5m in length.

Eyes - Two species have small eyes and two have large eyes. The Bluntnose Sixgill has eyes that glow a florescent blue-green.

Teeth - The teeth differ in the upper and lower jaw. Those in the upper jaw being smaller, cusped, and more pointed than the large comb-like one in the lower jaw.

Gills - As I mentioned before, these sharks have either six or seven pairs of gill slits.

These sharks are ovoviviparous , meaning the mother keeps the egg cases within her until they hatch and the pups are born. Some species, such as the Bluntnose Sixgill, have very large litters, sometimes over 100 pups.

Return to World of Sharks from Cow Shark 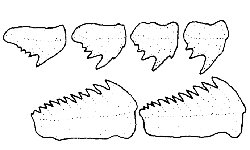 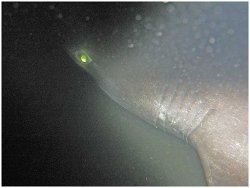