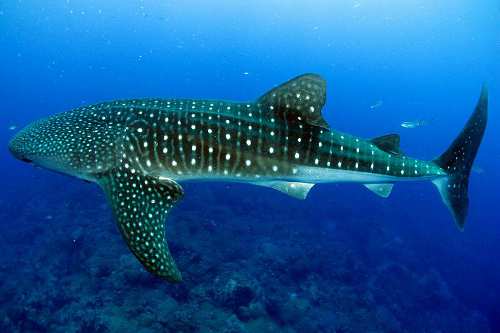 The truth is, very little is known about this beautiful animal.

At birth pups are between 55 and 65cm in length. Mature males average about 6m and females about 8m, though it is suspected that they can grow much larger.

The largest one ever caught was just under 13m long and weighed over 20 tonnes though there have been reported sightings of sharks up to 18m.

The markings of the whale shark are unmistakable. Their dorsal, or upper side, varies in colour from greenish-brown to bluish or grey with a chequerboard-like pattern of pale yellow, grey or white spots.

The ventral, or under side, is white.

The first dorsal fin is set a little further back than midway and is a tall, roughly equal-sided triangular shape. A small pair of pelvic fins are located underneath it.

The pectoral fins are wide at the base and taper as they sweep towards the rear. The caudal fin has a slightly longer upper lobe in adults, though in juveniles it can be almost twice the length of the lower one.

They have prominent ridges running the length of their bodies, the lowest one forming strong caudal keels on the caudal peduncle.

The teeth are small and not particularly well developed, but what they lack in stature, they certainly make up for in numbers. They can have as many as 300 to 350 rows of teeth.

This huge animal feeds on the tiniest of sea creatures, zooplankton. It also eats eggs and sperm during mass spawning of both fish and coral.

It feeds either by swimming with its huge mouth wide open forcing water and food into its mouth (ram filtration), or by sucking in huge volumes of water by opening and closing the mouth (active suction).

These sharks are ovoviviparous and give birth to large numbers of pups. One female, harpooned off the coast of Taiwan, was found to have 300 developing young in her uterus. The gestation period and breeding cycle is unknown.

Whale sharks like warmer water and are found worldwide in sea temperatures of about 20 to 30ºC. They are a migratory species and are known to migrate to fish and coral spawning grounds to feed.

They're pelagic so are found mostly in the open ocean or just offshore, but are known to come inshore at times.

They range from the surface to depths of about 700m.

Known as the gentle giant of the ocean, the whale shark poses no threat to humans. The most common injury being an accidental whack from the huge tail fin.

It's my dream to, one day, freedive with these magnificent creatures. Watch the video below and you'll probably be adding it to your bucket list too.


Return to World of Sharks from Whale Shark 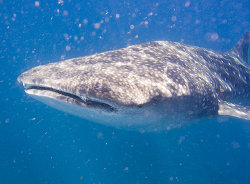 The whale shark's mouth can be up to 1,5m across! 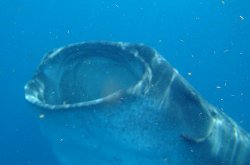 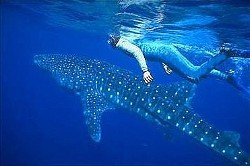 Snorkelling with a whale shark.