Members of the Angel Shark family, or Squatinidae, are odd looking sharks and really resemble rays more than the 'typical' shark. 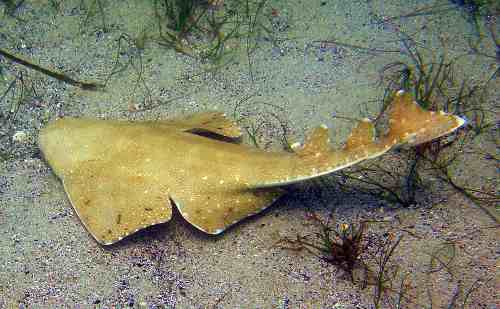 The Angel Shark family consists of one genus and 20 species.

In 1555 Guillaume Rondelet, a French physician and naturalist, gave these sharks the name Monkfish due to their apparent resemblance to monks. I'll have to have a good look at one next time I pass a monastery because I can't quite see it myself.

This shark family is not considered dangerous though they will, understandably, defend themselves if harassed. They have sharp teeth and powerful jaws, so approach with caution or, better still, observe from a distance.

Many of them have beautiful markings and are very well camouflaged against the sea bed, so please do be very careful when diving or snorkelling in warmer shallow waters.

Little is known about many of these sharks. They are ovoviviparous and may have from as few as 2 to as many as 25 pups per litter, depending on the species.

They're bottom dwellers and like shallow temperate to tropical seas.

Return to World of Sharks from Angel Shark 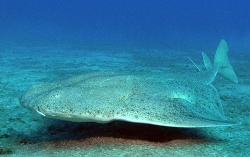