The size of the pups at birth is unknown. It's thought that mature males grow to around 400cm and females to around 500cm with a maximum length of 530cm.

These sharks have a very large head in relation to their bodies, with a huge terminal mouth which extends back behind the eyes.

The upper body is a darkish grey colour with a pale to white underside. There are some darker markings on the lower jaw and the fins are dark with paler margins on the pelvic and pectoral pairs.

They have two dorsal fins, the first one being much larger than the second. The pectoral fins are long and flexible and the pelvics are much smaller and set well back.

This shark has many small hooked teeth set in a very large mouth.

This is a filter feeder feeding mainly on plankton. It's thought that it may feed by suction, though this has yet to be observed. It has finger-like gill rakers on the interior gill slits for filtering food out of the water.

In 1990 scientists managed to track one of these sharks off Dana Point, California. During the 50 hours of monitoring they observed that the shark migrated vertically, presumably to feed.

Very little is known about reproduction in this shark though it is thought to be ovoviviparous.

Though there are very few records of this shark it is possibly distributed pretty much world wide in the tropics.

Return to World of Sharks from Megamouth Shark 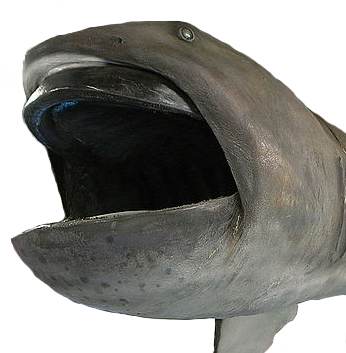