Thanks to their odd shaped heads, the Hammerhead Shark family, or Sphyrnidae, are probably one of the most recognised fish in the sea. 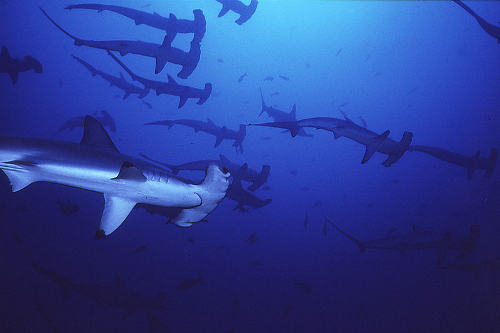 There are 9 recognised species in 2 genera.

These sharks are often seen in schools during the day but go off alone to hunt at night.

Hammerheads tan! Marine biologists Chris Lowe and Gwen Goodman-Lowe, from the University of Hawaii, noticed that the hammerhead pups they had moved from murky waters to the clear waters of their research pool were changing colour.

Some sharks have the ability to change colour in a similar way to the chameleon in order to blend in with their environment, but these pups were going darker even though the bottom of their pool was white sand.

The Lowes did an experiment where they placed an opaque covering over the dorsal fin of of some newly transferred pups. Sure enough, over time, the pup's colour darkened, and when the covering was removed the dorsal fin was as pale as it had been when the animal was originally caught.

It's known that some fish get sunburn, but the hammerhead is the first one known to actually tan.

Another first seen in these sharks is parthenogenesis, or the ability of the female shark to give birth to young without the need for sperm from a male.

In 2006 a new species of hammerhead shark was discovered. Well, I say new in the loosest possible way, as later genetic profiling suggests it may have split from the Scalloped Hammerhead as long as four and a half million years ago.

First seen off the coast of South Carolina in the United States, it has since been noted off the southern coast of Brazil.

Return to World of Sharks from Hammerhead Shark 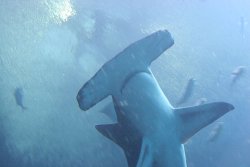