Urgh, centipedes - now they really are the stuff of nightmares!

The classification of these sharks is complex. Some scientists place them in the order Hexanchiformes, while others give them their own order, Chlamydoselachiformes. We're sticking to Hexanchiformes because it's easier to spell. Very scientific, I know ;)

These are medium sized sharks with a long, slender, eel-like body. Pups are born at around 39cm. Mature males measure from about 92 - 163cm and the females average a length of between 130 - 135cm. The maximum length being around 196cm.

They range in colour from a dark brown to brownish-grey or even brownish-black. They may be lighter underneath and the fins a little darker in colour.

The caudal fin is asymmetrical with only an upper lobe present. It is roughly triangular and has no sub terminal notch.

These sharks have small, three-pronged trident shaped teeth. They're very sharp and spaced widely apart. The teeth are curved backwards.

Their diet is made up of cephalopods, bony fishes and small sharks. They have long and flexible jaws which allows them to open their mouth wide enough to swallow relatively large prey whole.

Apparently, based on studied stomach contents, their favourite food is squid, which could make up about 60% of their diet.

These sharks are aplacental ovovivparous. Litter sizes vary from 6 to 12 pups, though 6 is more common. The gestation period is thought to be the longest of any vertebrate and has been estimated at as long as three and a half years.

They are found at depths from about 50 to 1500m and occasionally at the surface. They are uncommon but scattered fairly widely worldwide.

Initially it was thought that there was only one species but, in 1988, the South African research ship FRS Africana caught a male off the coast of Lüderitz in Namibia. It turned out to be smaller than other known mature frilled sharks, so further research was undertaken.

The main external differences found were in the proportions. Though it has the long eel-like body, it is smaller when mature.

It has a longer head and gill slits, and larger, rounder and more widely spaced eyes and nostrils. The mouth is wider and the pectoral fins are set further back than those of C. angiuneus.

Based on stomach contents their main diet seems to be smaller sharks.

Nothing is known about its reproduction, but it is presumed to be ovoviviparous.

Initially this new species was named Chlamydoselachus sp. A, but it was formally named after the ship it was caught by in 2009.

The Southern African Frilled shark is found from Southern Angola to Southern Namibia. Frilled sharks have been caught off the coasts of the Eastern Cape and KwaZulu-Natal, South Africa, but it's unknown which species these were.

Return to Chlamydoselachidae from Frilled Sharks 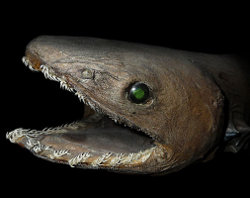