The Great White Shark, or Carcharodon carcharias, is one of the most awesome predators on the planet. Perfectly designed, it uses stealth, speed and power to take its prey. 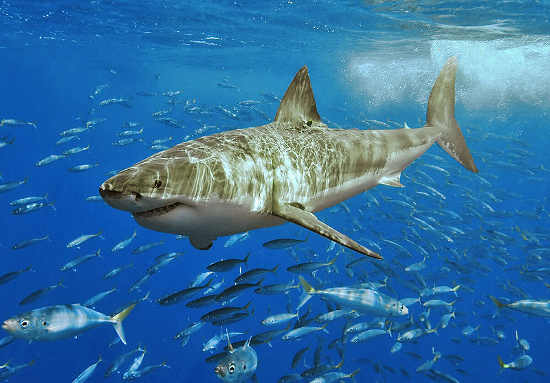 Pups are usually between 100 and 160cm at birth. Adult males can grow to 400cm and females to about 500cm, with 600cm being the maximum. They are well built sharks and can weigh more than a tonne.

Dark greyish on top with a clear line where the colour changes to white underneath. The underside tips of the pectoral fins are black.

They have fairly large, well curved pectoral fins and a crescentic caudal fin with the lower lobe being almost as long as the upper. Strong caudal keels.

The teeth in the upper jaw are very large, flat and triangular with serrated edges. These are used to rip the flesh from larger prey. The lower teeth are narrower and are used for gripping.

The white shark is a highly intelligent and very effective predator. They have a varied diet. Young sharks will eat smaller fish while mature sharks will take much larger prey from fish to marine mammals.

Ovoviviparous with oophagy (see shark reproduction). These sharks breed every two to three years. They have a gestation period of about twelve to fourteen months and give birth to two to ten pups at a time.

The great white shark can be found from very shallow inshore waters to the open ocean, where they can reach depths of more than 1000m. They are highly migratory and one has been tracked from South Africa to Australia and back in less than a year.

They are warm bodied and prefer water temperatures of between 12 and 14ºC. 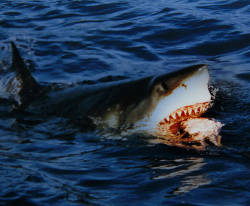