The Cookie Cutter Shark, also sometimes called the Cigar Shark, is definitely not the prettiest fish in the ocean but, what he lacks in the looks department, he makes up for in character. 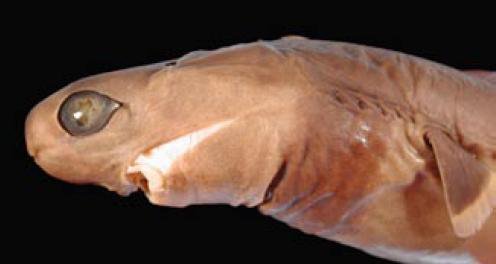 One of those weapons is a 'glow in the dark' belly. The cookie cutter shark has bioluminescent organs which can make him glow green underneath. Now, you might think this would make him stand out to predators, but it actually has the opposite effect.

He hunts at night and when he lights up his belly it makes him almost invisible from below. He has a dark band under his neck which doesn't light up and, to an unsuspecting animal below, this dark band looks like a potential meal.

When the larger animal makes a lunge for the cookie cutter, he spins round and latches on to its flesh with specially adapted suction-like lips. He then sinks his teeth in and rolls his body round and round until he comes away with a chunk of flesh the size of a golf ball. Nice, hey?

So, what else do we know about this little guy? Not a lot really, as they are so difficult to study. Here's what researchers have found out.

Size
This is a small shark reaching a maximum length of about 50cm. The average size of the mature female is around 38 - 45cm and the male is about 31 - 37cm. Size at birth is unknown.

Colouring
Brown to brownish-grey with lighter edges on the fins and a dark band on the throat.

Fins
The pectoral fins are relatively small making this shark a poor swimmer. The pelvic fins are larger than the two dorsal fins. The first and second dorsal fins sit well back on the body and are more or less the same size.

The caudal fin is almost symmetrical.

Reproduction
Very little is known about reproduction in this shark but it's presumed to be ovovivparous. The number of young is unknown.

Distribution
It's found in tropical oceans and is fairly wide ranging. It has been found at the surface at night, but usually inhabits deeper water from 2000 to 3000m. 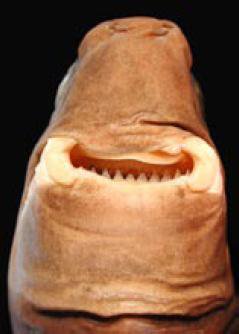 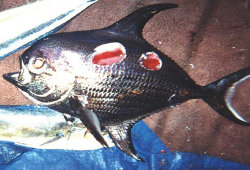