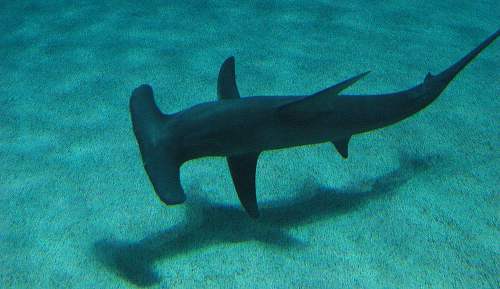 It is a large shark and will, quite rightly, defend itself if provoked or threatened.

Unlike some members of the family, great hammerheads are solitary and do not swim in schools.

Dark olive to greenish or greyish brown with a white underside.

The caudal fin has a long upper lobe and a shorter lower lobe.

The teeth are broadly triangular with strongly serrated edges.

Their preferred food seems to be stingrays, though they eat a wide variety of prey. Their diet includes cephalopods, crustaceans, fish and other sharks. They are known to be cannibalistic.

Their sense of smell and their enhanced electromagnetic senses help them to easily locate prey buried in the sand. Their mouth, situated on the underside of the head, lends itself to bottom feeding.

They are yolk sac placental viviparous. The number of pups in a litter can vary from as few as 6 to more than 50. The gestation period is around 11 months and they breed every two years.

The great hammerhead is found in tropical seas worldwide. They come close inshore as well as well out into the open ocean. They're happy in depths from as shallow as 1m to as deep as about 80m. They migrate to cooler waters in the summer months. 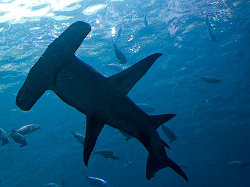