Pups are about 24 to 30cm at birth. Mature sharks average between 125 and 167cm with the male getting to a maximum of around 183cm and females possibly reaching a top length of 245cm.

The upper side varies from a greyish colour to a reddish or greenish brown. They have some lighter and darker spots scattered over their body. This helps them to blend well with their surroundings. Some have a white spot just behind the head.

The underside is pale to white. Dorsal fins are dark in colour with a much lighter trailing edge. Juvenile sharks are brighter in colour than the adults and may have darker and lighter patches.

Another feature in the younger sharks is a row of thorns down the middle of the back. These are not present in larger sharks, though they do all have small spines around the eyes and the snout.

The anterior lobes of the pecs are not fused to the head. Early researchers can be forgiven for mistaking these sharks for rays.

They have two dorsal fins which are set well back on the tail.

These sharks have sharp teeth and powerful jaws. The teeth are triangular and needle-like and, though they're not considered a danger to humans, they can give a nasty bite if provoked.

Their favourite foods are benthic bony fishes and invertebrates as well as skates. However, there is a record of an angelshark being found with a whole cormorant in its stomach, so I guess they're not too picky.

They're able to detect prey using barbels, the whisker-like projections on either side of their mouth.

They are yolk sac, or aplacental, ovovivparous, meaning that the pups hatch inside the mother's uterus and feed from a yolk sac until they're born. The gestation period is around 8 to 10 months and the litter size varies from about 7 to 25. The larger the mother, the larger the litter.

It's thought they breed once every two years and, because they are slow to mature, this makes them vulnerable to exploitation.

These sharks like the mud or sand of the shallower inshore waters and estuaries though they can be found in depths of over 150m on continental shelves. They migrate to cooler waters in the summer.

Sadly they are now believed to be extinct in the North Sea, and their numbers are declining rapidly throughout their natural habitat.

Return to Angel Shark from Angelshark 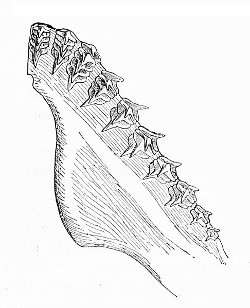 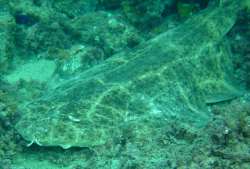