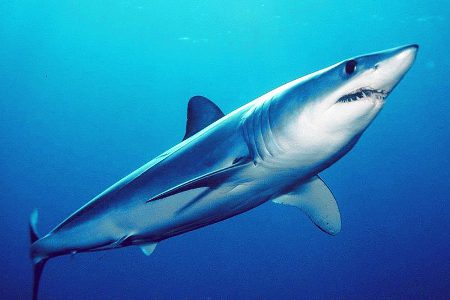 It is a very active shark and can cover large distances in a short period of time. It is thought to be the fastest of all shark species and one of the fastest fish in the ocean.

It is also an excellent jumper, capable of reaching heights of more than 6m. This athletic ability makes it a sought after target for game fishermen.

Colouring
The dorsal, or upper side, varies in colour from vivid blue to grey, while the ventral, or underside, is pale/white.

Teeth
The teeth are long and slightly curved. They have no serrations and are very sharp. Even when the mouth is closed the teeth are still visible, especially in the lower jaw.

Reproduction
Shortfin Mako have a gestation period of between 15 and 18 months and are ovoviviparous with oophagy occurring in the later stages of development. Litter sizes range from 4 to 25 pups with more, and bigger, pups being born to larger females.

Due to the long gestation period, females give birth once every two to three years.

It is found worldwide in tropical and temperate waters. Although it is warm-blooded and able to maintain a body temperature higher than the surrounding water, it prefers waters above 16ºC.

Return to Lamnidae from Shortfin Mako 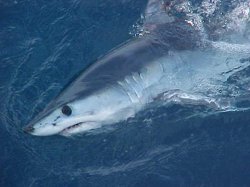 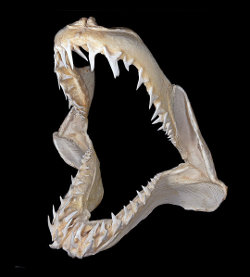