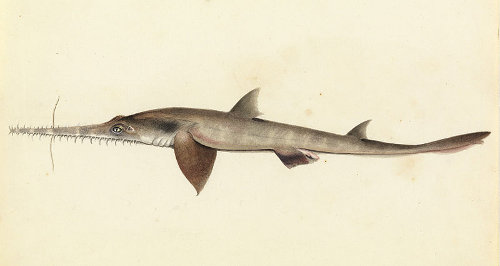 We'll just have to get ourselves over there and see if we can find one to shoot. With a camera, of course!

Pups are between 31 and 34cm at birth. Mature adults average about 90cm but can get as long as about 140cm.

Yellowish to greyish or sandy brown with varied darker patches, bands and blotches on top and pale to white underneath. The underside of the snout is a pale pinkish colour.

The teeth on the rostrum are very sharp and alternate between one larger and one smaller tooth all the way up. There are about 20 teeth along each side. They also have 40 - 50 teeth in their upper jaw.

The toothy snout is not only a formidable weapon, but also a well adapted sensory organ. With a pair of barbels situated about halfway along, and ampulae of lorenzini, it is capable of locating prey by sensing vibration, bioelectricity and chemical concentrations in the surrounding water.

Once it has detected a meal it goes into slasher mode and kills or disables the prey with a side to side swiping movement of the snout. It can also use the snout to grub prey up out of the sand or mud of the seabed.

The longnose sawshark likes small fish and crustaceans and is partial to a bit of squid too.

These sharks are ovoviviparous. The pups are born with the rostral teeth lying flat against the rostrum to prevent injury to the mother. Litters of around 5 - 20 pups are born every two years. The gestation period is thought to be around a year.

This shark is found off the coast of southern Australia at depths of between about 40 and 300m. They prefer sandy or gravel sand bottoms and occasionally come close inshore into estuaries and bays. 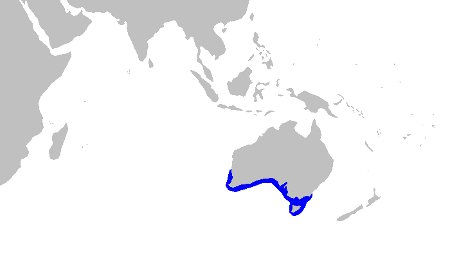