The Greenland Shark
A Giant of the Depths

They were once thought to be capable of an impressive turn of speed when going after fast prey, but scientists now believe they may prey on sleeping seals rather than giving chase.

These are large sharks averaging between 250 and 450cm, though they have been known to reach lengths of over 6m. Pups are around 40cm at birth.

Grey or brown in colour, they have few clearly distinguishing markings, though some have small darker and slighter spots and patches.

Small needle-like teeth in the upper jaw and larger, wider teeth with bent cusps on the lower jaw.

This shark enjoys a varied diet and is an opportunistic scavenger as well as a hunter. Stomach contents have shown it to eat the carcasses of drowned horses and reindeer. It's also known to be cannibalistic.

Many of these sharks are totally blind because of a copepod parasite, Ommatokoita elongata, which attaches itself to the cornea of the shark's eye. There has been speculation that this parasite may be bioluminescent and lure prey close to the mouth of the shark.

Due to the very poor visibility in the waters the sharks inhabit, this blindness doesn't interfere with their ability to find food. They have an excellent sense of smell and use this to find food.

They are ovoviviparous but little is known about the breeding cycle of these sharks. The gestation period is unknown and they are thought to give birth to litters of up to 10 pups at a time.

Named after the place it was first discovered, the Greenland shark likes cold water and is found further north than any other species of shark. It ranges from the chilly north Atlantic to as far south as the Gulf of St Lawrence. 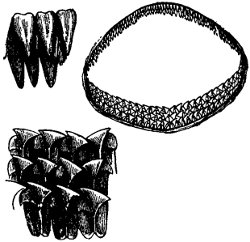