The blacktip shark, or carcharhinus limbatus belongs to the order Carcharhinidae. This shark is a fast and active swimmer and they're often found in schools near the surface. 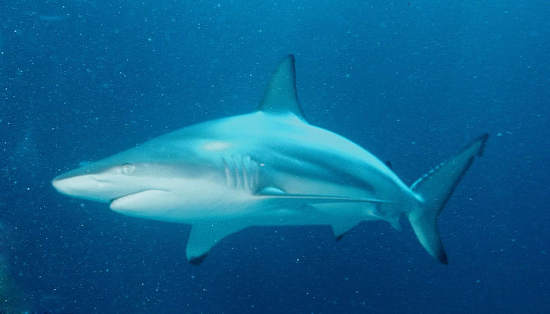 They have small eyes and a nictitating membrane is present. Their gill slits are longer than those of other members of the carcharhinidae family.

Grey to greyish brown on top with a pale to white underside and a noticeable white band going up the side.

They have two dorsal fins with no interdorsal ridge. The first dorsal is fairly high and slightly swept back. It is situated slightly behind the paired pectoral fins.

These are small and sharp, and have cusps and serrated edges. The teeth in the upper jaw are slightly wider than those in the lower jaw.

These sharks eat mainly bony fishes with the odd ray, skate or smaller shark thrown in for good measure. They also occasionally feed on crustaceans and cephalopods.

Blacktip sharks are viviparous with a yolk sac placenta. Females are seasonally migratory when pregnant. Litter sizes vary from 1 to 10 pups tough 4 to 7 is more common.

The gestation period is 10 to 12 months and they breed in alternate years. Females often return to the inshore nursery grounds, where they were born, to give birth.

They are found widely in tropical and subtropical areas. Usually close inshore and often off river mouths, shallow bays and estuaries. They do tolerate low salinity but not fresh water.