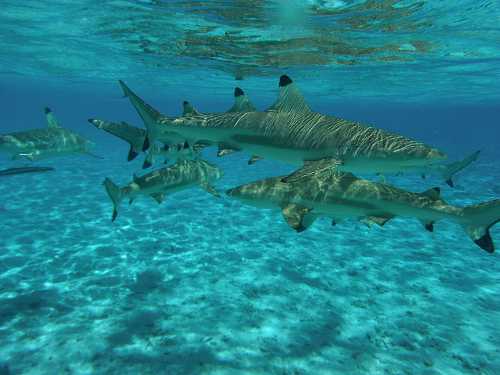 Size
Pups range from about 35 to 55cm with males growing to about 90 - 100cm and females reaching roughly 95 - 110cm. Larger specimens have been recorded but nothing above 2m.

Colouring
The dorsal side is a light brownish grey colour. They have a pale stripe on the flank and a bright white underside.

The distinctive black tips, highlighted with white, on the fins are what gives this shark its name. They’re particularly noticeable on the first dorsal fin and the lower lobe of the caudal fin.

Teeth
The teeth are narrow and triangular with cusps. In the male the teeth are slightly more curved than those of the female (though there are easier ways to sex a shark). Both upper and lower teeth are serrated though the serrations are finer on the lower ones.

Diet
This is an active predator and eats small bony fish as well as a variety of other invertebrates including cephalopods and crustaceans.

Reproduction
Yolk sac placental viviparous, this shark gives birth to 2 to 4 pups at a time. The gestation period is thought to be about 16 months.

Distribution
This shark prefers shallow inshore waters in tropical and sub-tropical seas. They're usually found close to the surface, often with the dorsal fin exposed, though it has been recorded at depths of up to 75m. 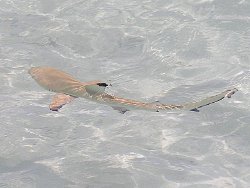 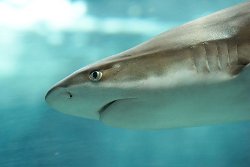